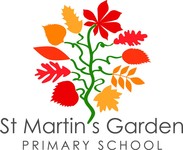 "On entering the school, there is a wonderful feeling of space, calm and pride - the school is clearly well cared for by pupils and staff" Visiting Teacher

"The playground is fun to play in because it has a football pitch, basketball, climbing frames, apparatus and a quiet area" Year 5 pupil

St Martin's Garden Primary School occupies a very large and spacious site on the southern edge of the City of Bath. There are large playing fields, large playgrounds and the building itself has long corridors, and light, spacious rooms.

The school’s name was chosen due to its proximity to St Martin’s Hospital.  In the 19th Century this was the city’s work-house, and the school was built on the site of the gardens of the work-house. People who stayed the night at the workhouse had to spend the following morning working in the gardens, as payment, before they were allowed to leave.

The school, as it is now, a primary school, was opened on 1 September 2001, although the building was constructed in 1951.  It was opened at that time as separate Infant and Junior Schools, and in 1973 the Margaret Coates Centre was added to educate children with Autistic Spectrum Disorder (ASD). In the year 2000 the Governors of the two schools requested that the two schools be amalgamated into a single primary school, which happened on 1st September 2001.  In June 2004 the autistic children moved into a purpose-built Centre, physically linked to the school.  A Sure Start Children's Centre opened in September 2006.

What we've got to offer